Project/ Programs based on the Kagoshima University Charter 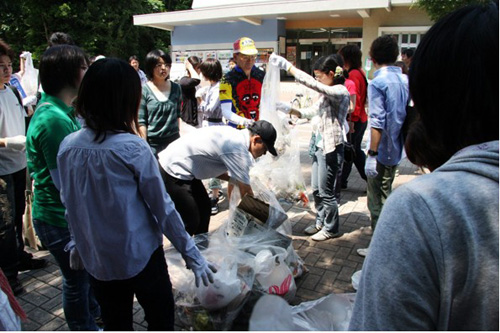 With the inauguration of 2008 as the 'first year of the Volunteer', Kagoshima University has begun 'Study of Volunteers' in the general education course and established the Support Center for Volunteer Activities. Based on the University Charter, Kagoshima University aims to develop further students' capacity as human beings and individuals through the volunteering and other such activities.That is, the university puts the 'volunteer' actively not only the aim in itself but as an important educational opportunity.

Putting its priority on students' self-expression, the program aims to educate students' nurturing initiative and altruistic mind.Concretely speaking, this means to help students sufficiently aware of the necessity to develop their own knowledge, empathy, judgment and energy further in supporting communities and people, independently, and to advance useful outcomes for communities through meaningful activities by interaction with local society and people.

The program tries to develop students' desire and willingness to volunteer in activities and to cultivate the 'Undergraduate with the spirit of enterprise' through the assistance of the Support Center for Volunteer Activities.

Multiple program consisting of the subjects collaborating with the Education Center and the Support Center for Volunteer Activities such as 'Study of Volunteers' and 'Nurturing Volunteer Coordinator', and subjects concerning technology acquisition such as 'Sign Language','Caring for the Elderly' and 'Rare Animals Protection'

2.Education Course to Cultivate the Spirit of Enterprise with Local Characteristics 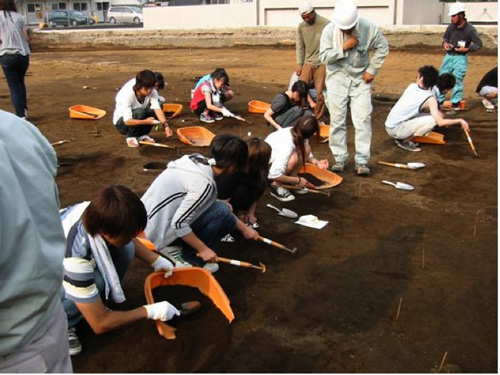 Kagoshima University achieved research results from many regional studies in various fields such as politics, economics, culture, medicine, industry, science, geography and climate and so on. Reflecting the knowledge in education, Kagoshima University established the 'View the world from Kagoshima in liberal arts course'. To embody the University Charter, the characteristics of the course are not only providing information endemic of the Kagoshima region, but also fostering insight into the nature of the essence of Kagoshima through understanding with scientific view, and additionally the ability to know about the world from Kagoshima.

The course consists of 10 subjects in the series of 'Kagoshima-touring', 15 subjects in the experience series and 12 in developmental subjects. Over a total of 2700 students are participating every year.

This liberal arts course provided in Kagoshima University is the general education to cultivate the spirit of enterprise based on the glocal (global-local) policy collaborating with volunteer education and international sensibility training education.

At present, for further developing the education philosophy taking advantage of the region's characteristics, the establishment of 'Glocal General Education' in which students from all over the prefecture in 2009 cooperate with other higher educational institutions, local governments, companies, private organizations and others, and moreover, the ideas to open the higher education utilizing ICT for not only the other universities' students but also high school students and members of society, are being examining. In addition, 'Program of Regional University Consortium in Kagoshima' has begun as the Support Program for Strategic University Collaboration of Ministry of Education, Culture, Sports, Science and Technology basis in January 2009.

The project was begun in October 2008 for the purpose of establishing an education and research base for the environment, organizing and systematizing the largest environmental problems in modern society.

The campus-wide project has a three-year term ending in 2010.
The aims of this project are as follows; 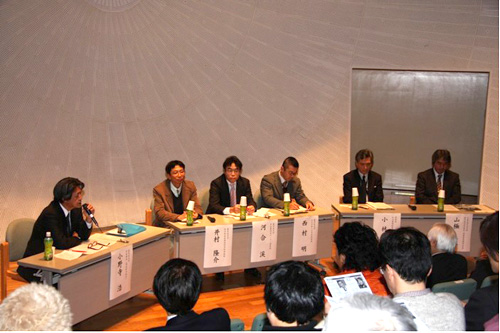 Based on the keyword 'hands-on policy', a working group consisting of university staff, prefectural government workers, mass media and others, is analyzing the current condition of the environment, nature and region in Yakushima, Amami and others in Kagoshima. In addition, the working group is preparing to offer an environment course in 2011.

On January 24th, 2009, the Kagoshima Environment Symposium was held to mark the start of the project. In the symposium the keynote speeches by Prof. Juichi Yamagiwa, Graduate School of Kyoto University and Mr. Hikaru Kobayashi, Director General of Environmental Policy Bureau of Ministry of the Environment (currently Administrative Vice Minister of the Environment) were made, and a panel discussion held including young researchers of Kagoshima University. The symposium ﬁnished successfully with participation of over 300 local citizens and other attendees.

Activity Plans for the year 2009

2. Local Symphony by the community and the university 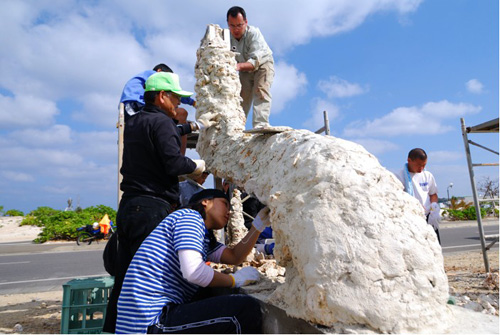 This project is promoted based on the mission declared in the Kagoshima University Charter as 'Kagoshima University contributes to the development and dynamism of the regional community through promotion of industries in the southern Kyushu area, enrichment of medical care and welfare, conservation of the surrounding environment, advancement of education and culture and many other endeavors.'

To address the various problems in the community society, the project promote specifically as follows;

This project is coordinated between the university and community through the joint studies and joint researches. The project is promoted in trinity of research, education and contribution to society.

Full scale investigation of regional problems, special courses based on analysis and collaborative learning, workshops to respond to the problems and hands-on activities are planned in the second year 2009.

3. Island Project: Autonomous and Sustainable Development in the Island World 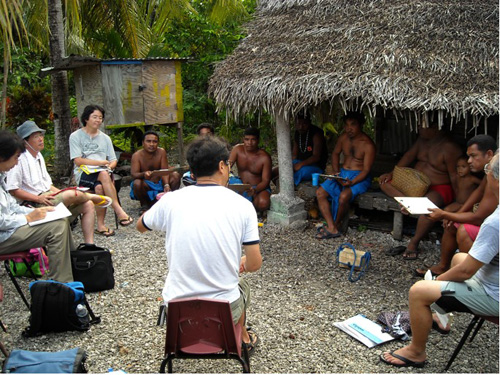 The major objective of this project is the fostering of autonomous development that is not only economically profitable but also ecologically sustainable for the island and islanders. This comprehensive research effort is comparative in scope, collaborative in nature, and draws on the personal and professional resources of Kagoshima University's Research Center for the Pacific Islands and of cooperating research organizations in and outside Japan. Areas of investigation include people, land, society, and oceanic ecosystems in the near and more distant Pacific. Small Pacific islands such as those in the Federated States of Micronesia are particularly vulnerable to the kind of environmental disturbance and devastation caused by global warming. As such, they have become the critical focal point for investigations into the efforts of global climate change that affect islands everywhere. Researchers from Kagoshima University Research Center for the Pacific Islands join with colleagues from the University of the South Pacific and the University of Guam to establish monitoring points form which to observe and measure this environmental perturbation. The professional research staffs of the University of the South Pacific and the University of Guam possess an extensive and distinguished record of achievement in studying the effects of environmental change on island societies. Both universities have existing research agreements with Kagoshima University. The results of this collaborative project will contribute to a clearer, more effective, and more feasible approach to autonomous development for islands that is at once economically viable and environmentally sustainable in this rapidly changing, increasingly globalized world. Another outcome of the project will be planning for establishment in fiscal 2009 of the Research and Education Center for the Islands, an entity designed to provide a stronger institutional structure for research and education on autonomous development in the larger Pacific islands world.

Investigation of Yoron and the Amami Oshima Islands.
Establishment of a data base for the Satsunan Islands on the project homepage.
Symposium: The Symbiosis of People and Nature in the South Paciﬁc Islands
Open lecture: Agriculture in the Amami Islands, Now and in the Future.

Investigation of the Uji Islands
Symposium: The Future of Islands Folksongs
International Symposium: Global Warming and the Paciﬁc Islands

Investigation of Gajya Island
Investigation of Chuuk, Federated States of Micronesia
Symposium: Islands in Asia and Kagoshima, the Strategy of Kagoshima
International Symposium: Global Warming and Globalization in the Paciﬁc Islands.

Preservation of Statistical Data on the Islands in Kagoshima Prefecture and Establishment on the project homepage
Investigation of Yap, Federated States of Micronesia
Open lecture: The Tokara Islands, Where Pure Nature Remains
Symposium: Creatures of the Sea